Where does all the water go?

Excess water from the bog now flows into a drain at King Edward and Crown St and disappears. Originally this water went into Khahtsulek (Head of the Lake) Creek and flowed through Chaldecott Park and down to the Fraser. Coho salmon used to swim right up to the very edge of the bog. Thanks to Terry Slack, this has just been recognized in the new sidewalk at King Edward with stampings in the concrete of fish and the name of the creek. As Terry says, it was exactly 100 years ago that the last salmon spawned adjacent to Camosun Bog. See http://dunbar-vancouver.org/
Posted by Laurence at 8:43 PM

Ever wonder where Laurence gets those plugs of sphagnum moss  for the restoration process? it's impossible to buy them in any garden store.  All the sphagnum in the restored bog comes from the nearby forest, but the forest is on former bog. 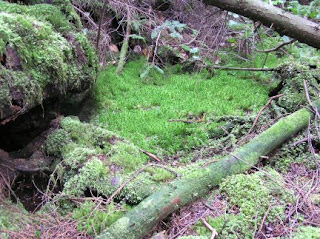 When the city installed drains, the water table was lowered and the bog was almost swallowed up by hemlock forest.

Some Interesting Artefacts from the Bog

During the restoration of Camosun Bog, we often find unusual items buried beneath the surface of the peat. Often these are garbage from another era but often they tell us a lot about conditions in the bog in years gone by 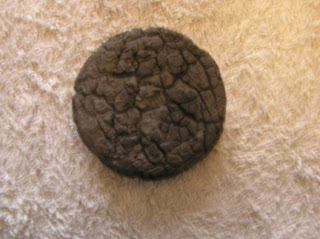 This shows an old hockey puck. We have found many of these over the years.  The pond used to be a lot larger than it is now and winters were colder. Every year, local kids played ice hockey in the bog and inevitably lost their pucks through the ice 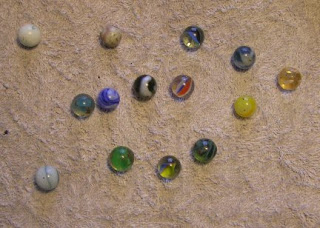 We have found large numbers of glass marbles in all areas of the bog. Some of these are quite beautiful. We believe these were used as ammunition for sling shots as kids tried to hit ducks and other creatures in the bog. Conservation ethics were quite different in those days - hopefully they were not successful in hitting anything.

This shows a “button hat” - a craze in the 50’s that dates back to the old Archie comic strips where Jughead was depicted wearing a hat of this type. In those days kids would swap buttons with their friends – the one with the most interesting buttons had the highest prestige. It looks like this hat was not particularly good as it had only one type of button. 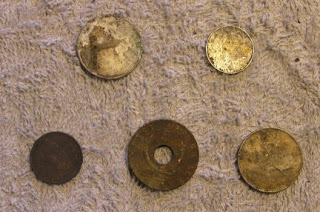 We have found many coins in the bog. The oldest is an 1870 silver coin from Spain. Silver coins are not much tarnished. However copper coins are badly etched in the acid conditions of the bog (pH around 4.5). It is often very hard to see the original inscription on them. 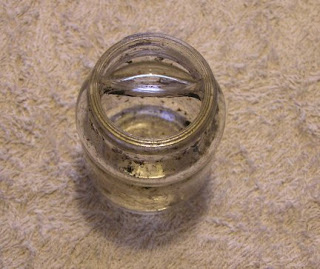 Few people today write with a nib and ink. This was the standard way years ago,and this picture shows an ink bottle containing a reservoir that can be filled with ink
Of course we also find a lot of real garbage. Years ago the bog was used as an unofficial garbage dump. There were major efforts in the 1980’s to clear up this mess but we still find a lot. The most unpleasant are broken bottles and we always have to be careful when we work to avoid hurting ourselves. Nevertheless it is interesting to find things in the bog as there is always the lure of finding something really unusual. We have never found any mummified human remains such as have been found in European bogs.
Posted by Laurence at 6:57 PM

Zavi (age 9) has been busy publicizing Camosun Bog. He had a display at a science fair at Queen Mary School and this was so well received that he was asked to show it at a city-wide fair at Science World.  This went very well and he was continuously busy answering questions and showing off his meat-eating sundews. As you can see the display looks very attractive. Congratulations Zavi! 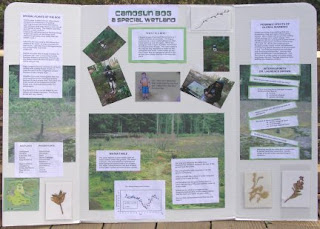