The original Camosun Bog website, camosunbog.org, will be shut down on February 8, 2018. It has been replaced by camosunbog.ca

camosunbog.org has been active for 18 years with relatively few changes. A remarkable length of time for a website

When the website was set up in 1999 the computing world was very different. Many people still used dial up (including myself) and this meant files had to be small to ensure reasonable loading times. Web pages were written using the newly developed WYS-WYG HTML editors (in our case Claris Home Page). It had also become possible to have two different pages on separate parts of the screen using FRAMES and the website took full advantage of this.


The website was written by Bill Maylone, a professional artist and animator. Bill did a lot of work for the NFB and probably his best known film is "64000000 years ago" which introduced dinosaurs to generations of Canadian school children.


Bill was a perfectionist and spent hundreds of hours on the programme. There was an editorial committee made up of Brian Woodcock, Nicole Robinson,Tom Nichols, the late Sig Techy and myself. However nearly all the work was done by Bill.

The text was very well written and encouraged readers to continue reading.  The website was filled with lots of neat touches.  Chapter headings were printed by  hand and were often supplemented by whimsical sketches. Some are illustrated below. He had a lot of trouble getting the right background colour for the site and finally had to use two separate pixels to get it right.

The site proved very popular. In  2011, it averaged 245 visits per month with 160 different visitors. This would mean something like 50,000 visits over 17 years – a remarkable number


The website was originally hosted by Nature Vancouver. However in 2010 we started using our own domain. This worked well for a number of years. However in the last few years it became impossible to make changes to the site. Also, it did not work that well with mobile devices. The decision was made to develop a new site and we appreciate that PSPS agreed to support us in this.


The new site was developed by Issaku Inami, Josh Braidek and Emma Harrower. They have put in a lot of time and produced an excellent and up-to-date site. The text is quite similar to the original but with some important additions including Musqueam history and a section on fungi

And so we bid a sad farewell to camosunbog.org but give a warm welcome to our new site camosunbog.ca 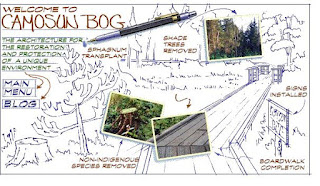